First: Our new hospital does not have to be "downtown", or even "In Utica". This according to the New York State legislation that promised Oneida County $300M for healthcare transformation projects. Please consider this... 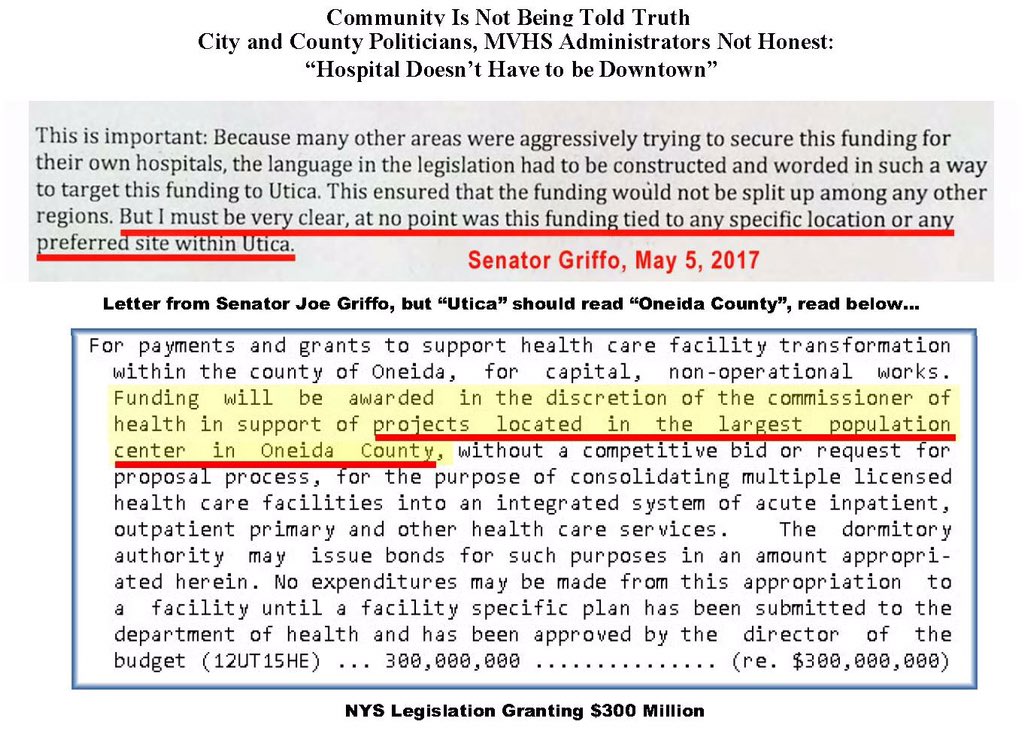 Next, recall the New Hospital Site Study, finally released on as part of the New Oneida County Hospital SEQR DEIS. This study references the legislation which carried the "population center" langauge. In doing so, MVHS gave MVEDGE the instructions to search for ; specifically worded, "5 and 10 mile radii were drawn around the city of Utica and a number of properties were identified for initial evaluation."

As far as the "largest population center in Oneida County", where the people are located who need the healthcare, please see below...

Deep Dive (PDF), plus the Centroid Of (3) Population Centers

Here are the coordinates and Google map locations for...

Once you find a location, enter your home's street address and search for directions (and time) it would take you to arrive a "hospital" site location.

is only a local effort by; Mohawk Valley EDGE And A Few Special Interest Groups Supported By Politicians, not the state legislation, AND Not The Hospital Board.

Have a look at their Site Study, it appears to be very subjective, replaces facts with misinformation, but that's not surprising as it is a study that they had to "Deny Rigging". Look at the actual "data" that's being used to place our new hospital into downtown, its these words in these Foiled Emails.

As far as the "largest population center in Oneida County", where the people are located who need the healthcare, please see below.

Deep Dive, plus the Centroid Of (3) Population Centers

MVHS's New Hospital DEIS has been released! A Study was done (not released to public unitl now, after three years!), but now the public can finally read it (DEIS Appendix D), the Hospital Site Selection Process Summary Memorandum, as they call it.

This study found 12 possible new hospital locations, but they proposed just three; two either have or had a hospital, while a third would create a new site- in Downtown Utica's "Central Business District"...

Sadly, the public has never been offered a scientific or mathematical explanation of where our communities only hospital should be positioned. Seems the goal should be to make accessibility a geographic avaerage for all of those in the Mohawk Valley Health System's service area. For example, a study we will call, "The Quickest Hospital" examines hospital location and the travel distance and time for surrounding populations throught the United States.

(Note: Also troubling, the proposed downtown site would be a site that would be susceptible to possible mandatory evacuation. Why? Becuase the CSX Railroad Tracks Are Just 1,400 Feet Away. Downtown hospital advocates have minimize this railroad risk and done so even while trains travel faster, pull longer loads, and care more dangerous cargo.)

Please consider... The Classic method for mapping population density, and the simplest, is based on statistics for administrative units... putting density in terms of inhabitants per areal unit. If the administrative units are large this “relative” method still will not give a satisfactory result. In order to make the units smaller one can cover the land with a grid and count the population of each square, and then compute the density. (Ref.)

September 1, 2018 - Hospitals, like Oneida County's proposed concept and per the legislation, should be placed by the population...

A population center cannot be defined by merely stating zip codes. While they can help to tell a story, much more data and math is required. Join the conversation as #NoHospitalDowntown Talks Population Center Regarding Oneida County's New Hospital.

Imagine if everyone within our region had a medical emergency at the exact same time, all of us required a hospital, so what would be the best location for the hospital? 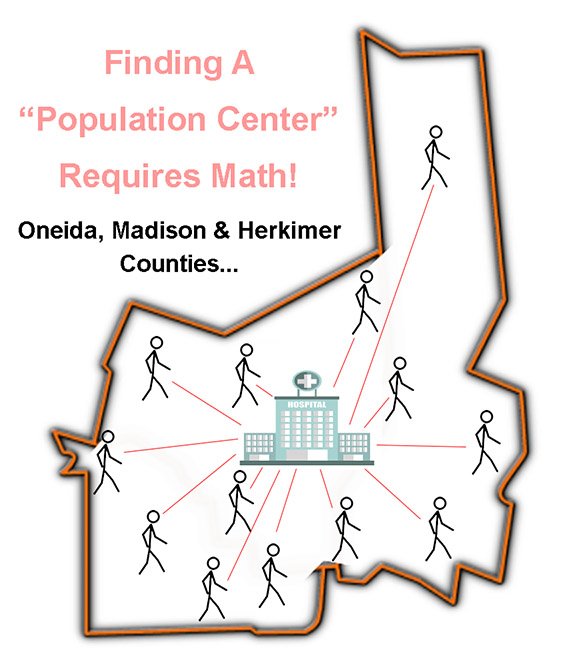 The hospital should be positioned so each person has an equal opportunity to arrive quickly, right? So one would plot everyone's travel distance/times and average the routes. Using some math and geometry the "center of the population" is found. This is where a community's "equal opportunity to arrive at medical care", a.k.a "hospital location", should be. There are other issues too, but the better questions might be; "What are the population centroids of; Utica, Oneida County, and the "Oneida-Herkimer-Madison Counties" hospital service areas?

Oneida County and City of Utica residents deserver a science and math-based hospital location. Perhaps one developed by professionals such as David Burgoon, or an accomplished scholar like Mark L Burkey. Not merely politicians and economic development folks seeking a massive project.

Consider this - "A choropleth map is a thematic map in which areas are shaded or patterned in proportion to the measurement of the statistical variable being displayed on the map, such as population density... Choropleth maps provide an easy way to visualize how a measurement varies across a geographic area or show the level of variability within a region. A heat map is similar but does not use geographic boundaries."

The hidden metatag "description" text on the NYS Department of Health's website reads:

"NYSDOH and DASNY announce the availability of HCFTP funds of up to $300 million: Oneida County, as established pursuant to Section 2825-b of the Public Health Law (PHL), for capital project(s) located in the largest population center in Oneida County that will consolidate multiple licensed health care facilities into an integrated system of care (including acute inpatient, outpatient primary and other health care services)."

May 12, 2016 - In locating a hospital, you would look at the population density as well as future trends. Since the hospital and government leadership will not provide site selection studies, we are looking for the information on our own.

From the population map below, you will see a significant population is within South and West Utica, and suburbs to the south and south-west.

Why have the folks pushing downtown, Look Who's Pushing The Downtown Hospital Concept, not offered citizens the information to support their claims?

Study - Geographic Accessibility to Hospitals in the United States: Rurality and Insurance Coverage