Utica's CoLa neighborhood is not modern, far from it, but it's not Utica's worst and holds both great potential and promise for redevelopment. Get to know our partners at Better Utica Downtown.

[ This is NOT the way to go, but they plan to Bulldoze Downtown Utica Beyond Recognition ]

A claim made in the Region's MV500 Effort (PDF) called the targeted hospital zone in Downtown Utica as: " This is a false claim.

Those seeking to build a new hospital district, are now working on step one Bulldozing 1/4 of Downtown Utica's Small Central Business District Below you can read a detailed account of this neighborhood as documented by our Landmark's Society. Let's turn away the Government's Urban Renewal-style Concept For A Downtown Hospital & 34-acre Hospital District.

Instead, let's restore some of the past! This as a new, walkable, and desirable place to live is promoted! 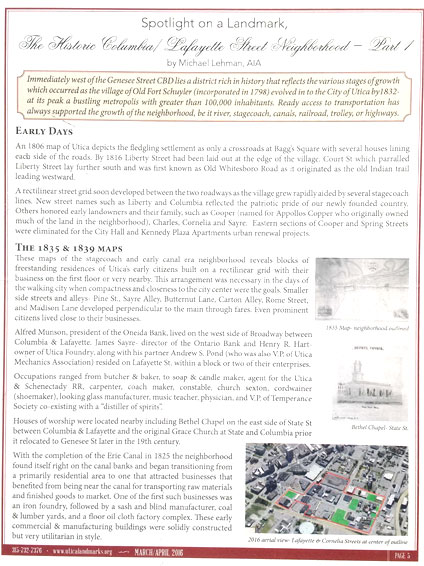 Whatever the ultimate decisions are for the location of the new hospital and for this area, there are certain things that must be considered as a matter of course:

Ultimately, there is a real need for public input and discussion on this process as it potentially affects all of us. We can all "agree to disagree;' but we will all have to live with the end results for a long time to come, and everyone needs to be heard on an issue of the importance and significance of this one.

Please act today, place a call(s) to your government representatives, and or sign our petition at a meeting listed below. Find us on Facebook as well.