We said, "Downtown Utica must preserve its historic buildings, streets, and alleys." Bulldozers and wrecking balls are exactly the thing that should not be employed! Facts, statistics, and growing downtown success stories support this stance.

As our group discusses Here, one study clearly calls for the exactly opposite of what the Hospital Concept offers.

April 4, 2019 -Why our battle MUST continue, "Why Preservation, Not Demolition, Has Worked Downtown"

Preservation, not demolition, has been the driving force behind the new growth downtown. https://t.co/KUPtfi44Gc pic.twitter.com/d9f2YGsBP1

Learn more about this smart city, Reuse and Revitalization in Jacksonville: Discovering the value of older buildings and blocks/ Also see the Downtown Jacksonville website.

September 11, 2018 - So many examples of the economic impact of preservation...

Loved writing this piece with @alibt97 for @ARMuniLeague. Great timing, as I just returned from Destination Downtown 2018 where we heard so many examples of the economic impact of preservation of Arkansas’s historic downtown districts. @MainStreetAR pic.twitter.com/b3BUiyBUki

August 2019 - Not directly related, however some themes might invoke thoughhtful consideration...

The @MVHealthSystem hospital concept is wrong for Downtown Utica, tries to #flipthescript at wrong time https://t.co/KOgiNvqDXN Dear @NYGovCuomo #NoHospitalDowntown is also the winning message for you, healthcare too! pic.twitter.com/FlU9nN2wah

Major General Butterfield says hello from Genesee St/Landmarc - probably not on your iTunes play list but his tune is known worldwide. pic.twitter.com/2IfqEwQU0C

Actually there are many Voices that get it!

May 28, 2018 - We've placed another stake in the ground! This building, and other Columbia Lafayette Neighborhood building owners have no intention of departing this historical area. Better way, the only way, is BetterUticaDowntown.

Happy Memorial Day to our supporters & opposition! This Columbia Lafayette Neighborhood should be preserved... pic.twitter.com/IyDbmnYCKl

We fully agree! So what do our Politicians, Hospital Administration & Civic "Leaders" advocating for it, say to that?

Read further, and we see "doing the math", shows that downtown development is the champion...

They both agree, historic buildings are worth saving!

June 30, 2016 -This study is written by a long list of urban planning professionals; companies and professional titles including:

Help #NHD in our conversations to keep Utica's hospital development at the St. Luke's Campus!

Sadly Downtown Utica has been targeted by many projects, proposals & people https://t.co/blaVXezOD7 Its a good thing we love #DowntownUtica! pic.twitter.com/H5JwIplcVf

February 20, 2016 - Titled “Older, Smaller, Better- Measuring how the character of buildings and blocks influences urban vitality” the report offers data that says a massive 34-acre hospital district is NOT what will make downtown Utica a popular destination to visit, walk, or live-in...

December 21, 2015 - Downtown Utica must preserve it's historic buildings, streets, and alleys. New developers and business owners have been acquiring and creating wonderful spaces in older buildings

Columbia and Lafayette Streets is prime real estate in the days to come, but only if we can hold-off the hospital's bulldozers. A fifth medical district would not create higher value downtown lofts, for-profit businesses, and places that attract visitors- but it would reduce Utica's tax base, which is something we cannot afford!

1976 - In his book, "Utica: A City Worth Saving", Frank E. Przbycien, P.E. writes the many reasons why historical buildings and neighborhoods should be protected and restored. On page 294, the Columbia Lafayette Neighborhood is shown in "Utica's Preservation District"... 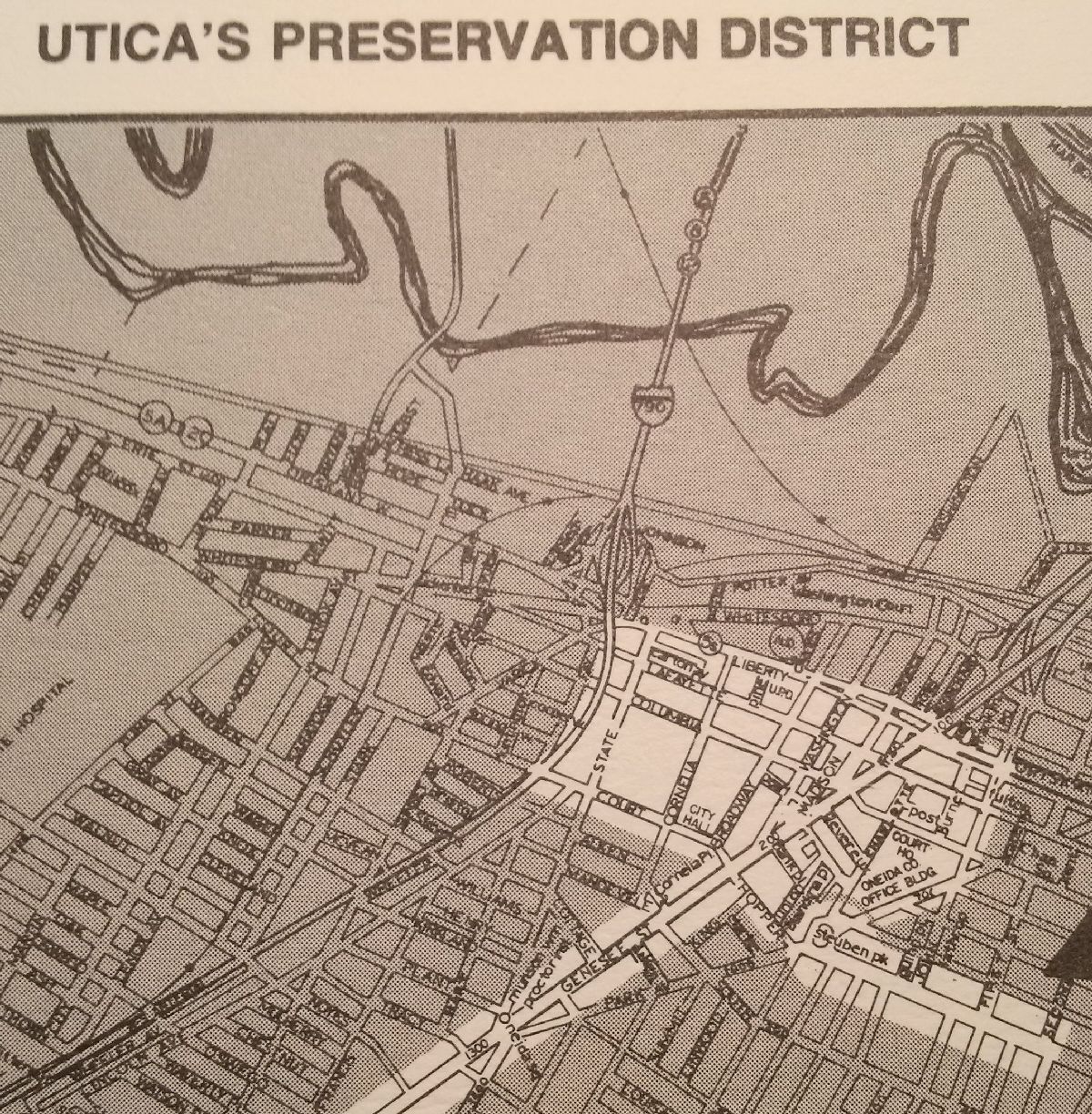 Also included in the "Utica's Preservation District" was Genesee Street (from Bagg's Square, south to the New Hartford village line), and the "Rutger-Steuban Park" areas.

Consider - The National Historic Preservation Act of 1966 (NHPA), as amended through 2000, established a program for the preservation of historic properties throughout the United States. Section 106 of the NHPA . Will there be federal funding, or a FAA-registered helicopter pad? NYS also has preservation regulations and mandates, we will be watching if and when the SEQR phase arrives.

November 13, 2015 Utica, NY - An arts organization from Minneapolis is in talks to create artists' live-work lofts in Utica. Perhaps for as many as 45-60 artists who would likely be located in or around Downtown Utica. According to the Utica newspaper, ArtSpace Projects Inc is Visiting Utica.

ArtSpace sees what #NHD sees, as they comment "So, you have exactly the right characteristics. You’ve got great historic bones here. You’ve got some amazing buildings that could be rehabbed and would make beautiful artists space.”

Visit the company's website to learn more ArtSpace.Org Such developments will preserve old buildings that will keep Utica authentic and walkable, and this is why we say #NoHospitalDowntown

November 5, 2015 - Whether this applies to evaluating one of our existing hospitals for demolition, in part or completely, and or bulldozing historic canal-era buildings in downtown Utica, why not call professionals in? Here in Utica residents were told that old downtown buildings would be razed, and perhaps streets closed, for a new hospital coming to 34-acres. Our politicians said they would find plans for the three old hospitals as the new hospital went up. However, the head of the hospital board told a crowd at a city meeting that St. Elizabeth’s would certainly not become low-income housing. Yet he confessed not a dime had been spent on redevelopment plans. It seems odd, that those two statements can co-exist, and in the same breath, right?

We suggest that the public be involved in the planning up-front, and that professionals, like Landmarks Preservation Commissions and the American Institute of Architects, be consulted as well. This was done for a hospital project in New York City (PDF).

Utica deserves the same measured steps, and an open discussion on all aspects of the hospital plans that involve our streets, historic buildings, neighborhoods and budgets; not to mention our future healthcare- which, by the way, is the most expensive healthcare system in the world and the worst performing.