The Mohawk Valley Health System (MVHS) requires an environmental "SEQR" study, as well as a Certificate of Need (C.O.N.) before they can secure a $300M New York State Grant. The City of Utica Planning Board adopted the project, Utica's Planning Board's SEQR Review.

Read NYS DEC's SEQR Q&A's, our collection of SEQR References, and our SEQR timeline/blog below...

The planners will have to decide whether to accept the [SEQR] statement or to request more changes, Thomas said.

“At some point, they have to vote to make it final and then, at least 10 days after that vote, they need to vote to approve finding statements,” he said.

January 17, 2018 - We attended the Planning Board meting today, however the MVHS hospital was not on the agenda. We had a letter to present anyway, "Attn: Utica Planning Board, Re: Nexus Center", yet the Chairman didn't seem to require his copy...

If tonight’s meeting is any indication, at least one @CityofUtica Planning Board member #Chairman wasn’t very serious. We submitted this letter https://t.co/U7HU0W9vvX - upon walking out of meeting, he threw it into the trash! pic.twitter.com/mF27wIQYyU

Plus, MVHS CEO Scott Perra already confirmed it in April of 2017, "Our Politicians Are The Ones, Mr Tony Picente, Anthony Brindisi and Mayor Palimeir...". This was repeated a few days later by MVHS COO Robert Scholefield, have a listen as Mr. Scholefield states, It Was Made Clear To Us...

The UticaOD was there and covers some details with Greg Mason's story titled, Utica board accepts hospital project’s draft environmental plan. Our audio of meeting joins the rest of our documentation, and ss soon as the DEIS is posted on City Of Utica MVHS SEQR page, we'll dissect and create a fully linked index.

How many cameras, their placement, duration, and with or without projected (one, two or three) MOB's? Was it hockey season, the college students and professors downtown? How about the "U District" (the casino, ballfield, beer museum, hop farm, and the second hidden parking garage)? Based on current downtown population or the forecasted MVEDGE "hospital induced economic growth" based on the EIS? Hey, was their EIS every done? See #emailgate, page 35...

July 20, 2018 - We watched and recorded their meeting last night. The way the meeting ran, questions they asked each other and discussed, clearly tells us the Planning Board is NOT qualified as they assured residents they were.

Did the board members even read it? https://t.co/DmihpSC8lQ We're watching every move of the @CityofUtica Planning Board on their @MVHealthSystem SEQR / SEQRA process. All ready informed their actions were illegal https://t.co/LgMTwflDEW

I wish I could say I was shocked.https://t.co/XobduA3iZI

There out of contract obligations, we also know they Were Given False Information, yet they left after their Sidewalk Nastiness.

Inside the "State" Office Building, the Oneida County Executive, Anthony J. Picente, Jr, sent-in 7 employees to speak on behalf of "his" county. Yet over a dozen concerned citizen spoke, and Frank-Montecalvo Replies to SEQR Scoping Draft via certified mail.

The scoping session is used to identify the adverse impacts related to #mvhsdowntown pic.twitter.com/DMGHRbjha5

May 27, 2018 - Action by citizens and a company responds, Enfield resident alleges wind farm misconduct; Black Oak responds. The resident's letter that drew the response is here An Open Letter to the Citizens and Town Board of Enfield about the Black Oak Wind Project, as well as the formal response letter.

May 15, 2018 - We are aware a new web-based page for the City Of Utica MVHS SEQR Review process. We are also reviewing this NYS document titled, New Environmental Assessment Forms Under SEQRA

We agree, cutting corners will not be tolerated, especially for political reasons...

The SEQRA process must not cut corners for the sake of political expediency. https://t.co/9xQxHagaMd

February 21, 2018 - The Planning Board responds, "To the administrators of the No Hospital Downtown (NHD) Facebook Group"

#NoHospitalDowntown alerted of another City Hall meeting. Utica's Common Council to vote to support Planning Board's decision to be SEQR lead agency... SEQRA Lead Agency Resolution: This resolution, if passed, would support the Utica Planning Board as lead agency for the SEQR process of the Mohawk Valley Health System hospital proposal.

February 18, 2018 - Issues can get complicated at times, and the discussion swirling around the new hospital is no exception, "Let's Keep It Simple"... A KISS for Our New Hospital!

Uticans who wanted to speak up in hospital planning board meeting silenced. https://t.co/Ic2oaD9g0h

Another account..."What none of the news agencies are reporting is that over 10 businesses were in attendance with letters from attorneys outlining why this is ILLEGAL!

Basically, just like when building a home, there are rules and an outline on proper sequence of how things have to be done. Instead of properly following the rules, they’re making them up as they go. It’s like playing monopoly with Elias.

Our attorney could not be in attendance, and sent us with a very thorough letter, explaining clearly why Utica’s planning board should not take lead agency due to their statutory authority. He told us what to do. They refused to let us speak, refused to acknowledge the letter, but we made sure it went on record that we handed it to each planning board member, they proceeded to tell us they weren’t even voting on the matter. THEN, all of a sudden decided in a 3-1 vote that they’d be the lead agency. I mean, what’s our attorney know?! He only litigates Supreme Court cases. Ha ha!

We have peace that good will come of this situation, but it’s really really really hard not to be rude or say mean things when you see the actions of those in charge of this project. It reminds me of watching my 3 boys fight, and how one baits the other to get them in trouble. It gets to the point where you want to say rude things out of frustration, and those in charge want you to say it because they’re antagonizing you to do so. We won’t do it, we won’t stoop to that level.

We won’t make any statements, but keep us and the local businesses in your thoughts and prayers.", Rachel Daughtry, Your Bargain Grocer

Planning Board member George Mitchell states in, This report the next step toward downtown hospital...

"Has some questions about some elements of the document that he said he plans to submit to Mohawk Valley Health System during the public comment period."

Many were on hand for the City of Utica Planning Board meeting. We asked to speak, were told "No", we spoke anyway. Yet they went on to make the decision as they knew they would...

Accounts of the meeting are posted below, as well as the unfolding story. First the Facebook thread that sparked media, Member Threat Made, But #NoHospitalDowntown Quickly Denounces Comment 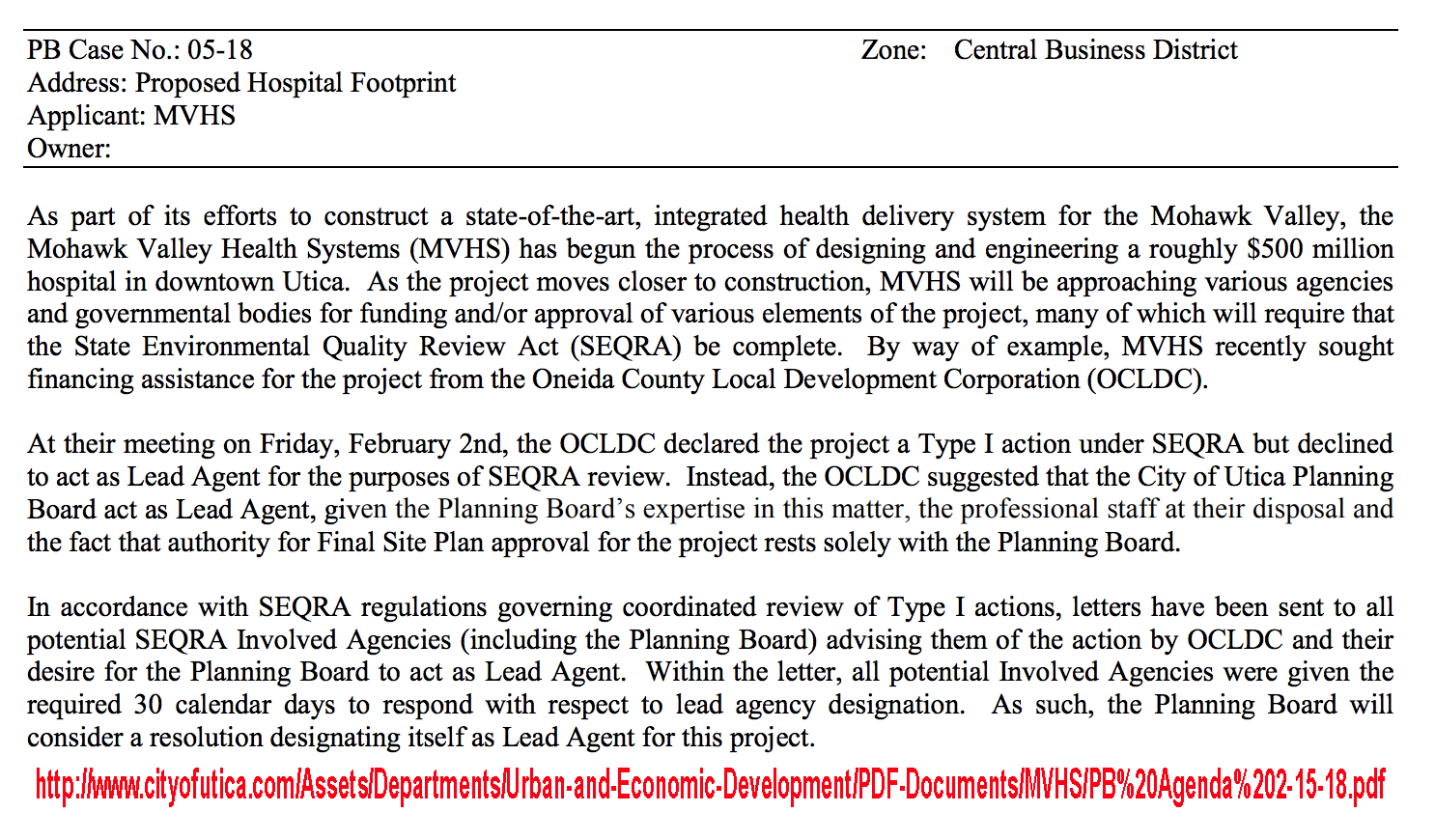 February 2, 2018 - As reported by the UticaOD, The New York State Environmental Quality Review process has begun for the proposed downtown Utica hospital

Last year we attended a Better Utica Downtown meeting. It was here the group was told one of the first questions asked in a SEQR Study is, "Was there an alternate location?" This statement came by way of a Rochester-based Architect & Urban Planner. Thus we say, in regards to 64-acres now owned by the hospital, What's So Wrong With St. Luke's?

Build new hospital at St. Luke's! As we state, All The Advantages Of The 64-Acre St. Luke's Campus and Why We Oppose The Downtown Utica Hospital Concept