The Utica AUD can attract 6,000 people at musical events, 4,000 for hockey. The AUD management has also said they want to expand, that's great. One project is complete and Nexus said to be next, but wait, there is the U District too! What do their plans have to do with hospital concept? We are watching!

July 20, 2021 - Back in the news, Potential bonding agreement for Utica's Nexus Center in works to cover construction costs.

The turf is down at the @ADKBankCenter! We can’t wait for Sunday’s Blue and Black game! pic.twitter.com/hjigQj4DFH

Rochester NY also is making headlines, but their teams says, Rhinos plan on vacating stadium by end of year. Utica team owners may have history that will come in handy making our Utica City team a great success, but that's a story for another time.

A sports bar with a full-service restaurant will be opening in May at the Adirondack Bank Center at the Utica Memorial Auditorium.https://t.co/URGvuWLyCO

The purchase of the Tartan Textile property is a huge win for the AUD Authority’s Nexus Center project and major step forward in the plans for #TheUDistrict. https://t.co/xHBjSpDkBZ

Get to the @ADKBankCenter early for Friday's matchup as we kick off the Christmas season with the lighting of our tree! There will be milk and cookies, carolers, and an appearance by Santa Claus! Lights go on at 5pm! pic.twitter.com/dmaHX9v6vp

Reads, "the construction of a 21,000 square-foot expansion... will bring the Utica Memorial Auditorium up to current standards for ADA, fire alarms, sprinklers, and women's restrooms, as well as provide permanent office space for both current and future employees..."

Aud to get $2 million in state budget https://t.co/VMSRdLifHP

March 31, 2016 - Utica's newspaper says Stop Delay on Aud Property Sale and let the developer proceed. The County, per Carl Annese the authority’s chairman, and per the newspaper, "said last week it has potential plans, but that he couldn’t release details... they may be able to unveil them publicly by the end of summer". 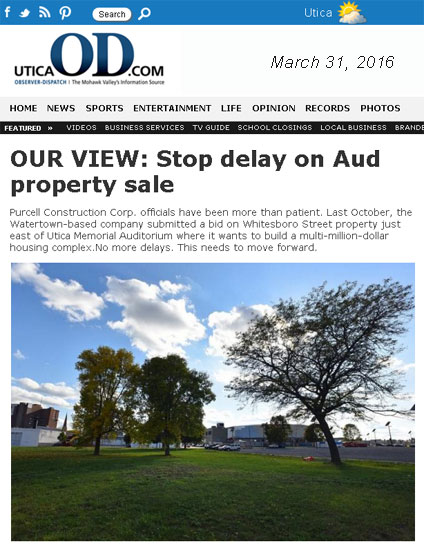 This, and as we've also heard the Aud Authority wants the same property for an expanded sports venue. But it's MUCH bigger than all that. As you've seen below, it's also about a downtown hospital and we've suggested below, the planning is in Albany. The city is mostly in the dark (leadership and residents), yet at the county level we have Picente Leading New Association for Sports, Entertainment Venues

Then further up at the state level, their planning for multiple parking garages, walkways, and new roads that will be shared between an expanded AUD, a new convention center, and a downtown hospital district- with some sort of for-profit medical center - as taxpayers cannot foot the entire "Next Phase of Nano" on their own, or will they?

It will be tied to saving the Hotel Utica, various downtown businesses, and connecting it all to Utica's Harbor project. Let's hope the economy holds up and that "nano technology" generates many billions in new revenue and the thousands of jobs we've been hearing about for the past 15 years

January 14, 2016 - Rather than place an apartment complex next to railroad tracks, perhaps the Downtown Utica-focused developer Purcell Construction, would build on a site where the downtown hospital thinks they're best located over on Columbia Street? In such a deal the Utica AUD might be able to make their "plans" come into better focus?

As we have reported below, a county-directed group seeks to build a sports and entertainment district: Upper Mohawk Valley Memorial Auditorium Authority offers $500,000 for a Bagg's Square Parcel in Utica. If you look into the story, you will see it is essentially Oneida County pledging money to the City of Utica. It is further pointed out that the taxpayer is the seller and the buyer. And if one really wants to see what it means to taxpayers, one place to look is at the Utica AUD's budget.

These facts will soon all become connected as we believe plans in Albany and City Hall will prove out that the Sports & Entertainment Facility plan (see below) are quietly going to combine with the New Downtown Hospital. And, just as private developers like Purcell get blindsided, we suggest if not awake, taxpayers in Utica and Oneida County will be too!

January 7, 2016 - Should college and universities spend millions and billions of dollars on sport teams, coaches, infrastructure, and everything that it requires? Or should institutions focus on preparing students for careers and all of life’s challenges that lie ahead of them? One university president suggests the answer is “No” Drexel University happily avoids the sports spending binges that sap resources at far too many other schools

What about very significant taxpayer dollars being invested into expanding county and city owned facilities- for example Rochester's Blue Cross Arena? The same venues where college teams, as well as privately owned companies, operate within and profit handsomely? In our case, here in Utica Mohawk Valley Garden Takes Over Utica Memorial Auditorium In this deal New York was investing $8,000,000 of the taxpayer's money.

If you love sports, you might say “sure!” But what if you happen to be out-of-work and or under-employed, and feel your regional governments have spent too much on the wrong things? Your leaders have been chasing employers to locate here- yet they haven’t shown up and you’ve been waiting for decades? But now, what if these same leaders suggest a new "big need", one calling for a new or expanded arena, sport complex, and even a hospital district complete with multiple parking garages and billed as a Oneida County Healthcare Facility Transformation?

At #NoHospitalDowntown we've been watching. We’ve been criticized that our questions will chase away $300M dollars in funding. Yet when our leaders say they’re eyeing 34-acres for a downtown hospital district, but no defined plans exist- and it’s only 12-acres! Well we have questions, especially when the 12-acres support Erie Canal-era buildings, and tax-paying businesses. While some buildings are not shiny or overly productive today, they're buildings prime for redevelopment into properties that cannot be recreated if bulldozed.

Rochester has spent heavily on their sport venue, just as Utica’s AUD has in recent years. Then more recently we heard our Oneida County Executive Anthony Picente is heading a new New York State venture. It's not private, it's "public", so taxpayers will foot the costs for the New York State Sports & Entertainment Facilities Association Today we’ve located the website they have under construction, visit them at NYSSEFA

When we look to see whose names are connected to the NYSSEFA, we found a firm called Park Strategies LLC, which was founded by and is run by none other than Former NYS Senator D’Amato. So this new public association, that Oneida County Executive Anthony Picente heads, appears to have a contact person who works for a private lobbying firm, Robert D Bulman, also of Park Strategies LLC The website features the Utica AUD, talks about the Utica Comets, is headed by our County Executive, but is the email and contact form information being received by a leading Albany-based lobbyist? Are things like this why U.S. Attorney Preet Bharara says New York State suffers from "a lot of enabling of corruption"

Either way, we suggest that Utica-area taxpayers prepare for a significant plan for their downtown. A plan designed by others, but paid in large part by taxpayers. And while labeled as an "amazing healthcare investment opportunity", it just might be "more urban hospital sprawl" designed to bring a parking garage to the Utica AUD and wipes-out our canal-era past. It also seems likely to wipe-out the historic police building and a modern police maintenance garage- which was a first step in the Utica's Gateway Plan but one that stalled.

You may read of this plan and so much more in a 2009 Cornell University thesis by Ross Randolph Pristera URBAN DEVELOPMENT AND REVITALIZATION RELATED TO CITY AND REGIONAL POLITICS IN UTICA, NEW YORK (PDF Link)

November 16, 2015 - Another development for downtown Utica: A $13 million, 129-unit, market-rate housing complex is turned down, while a $60 million Utica AUD-based Sports Complex is mentioned, but not detailed! Utica taxpayers should watch as the plan to teardown their police department (and it's newly constructed maintenance garage and parking lots), plus a total of 34-acres to build a new downtown hospital, begin to merges with a plan to place a parking garage at the AUD. Smoke and mirrors, plus a few headlines while a $13M Utica housing developer is blindsided!

September 22, 2015 - Assemblyman Anthony Brindisi called into WIBX First News with Keeler on Tuesday after a local businessman made accusations over the proposed downtown location for the new regional hospital in Utica. Insurance agent Jim Brock said downtown was the wrong location and that the spot near the Utica Memorial Auditorium was chosen without the people’s knowledge and backroom deals were cut. Brock is involved with a city group called #NoHospitalDowntown which is opposed to the Columbia Street area location.

"One year after a $780,000 renovation project, the Utica Memorial Auditorium is preparing to undertake an even larger venture. The 53-year-old arena is in line for $2.25 million in state funds for renovations, some of which could be used to help lure a minor league hockey team back to town."

Story recaps some AUD history: "The auditorium was built in 1960. At the time it was one of only three auditoriums in the world with no poles and a clear view of the event no matter where you sat. The Aud seats 3,800 for hockey, 4,500 for basketball, and 5,000 for conventions, concerts and other events. Over the years it has hosted countless graduations, commencements, concerts and sporting events. Last summer, the authority replaced 1,207 seats on the lower level and new lighting, using the authority’s savings.

Two weeks ago, Assemblyman Anthony Brindisi, D-Utica, and state Sen. Joseph Griffo, R-Rome, announced there was $2 million in this year’s state budget for further upgrades but didn’t specify what those changes were. That was on top of a $250,000 grant award to the auditorium in the 2011 state regional economic council competition for improvements to its façade.