So why is this road race called the "Boilermaker"?

Scroll down and read the story - or download the Complete Story Behind The Boilermaker Road Race Name (PDF 7.4MB). You may also click any page number/heading to download individual pages.

Utica Boilermaker? Why do we celebrate and call this Utica race the "Boilermaker"?

A great story that started in Downtown Utica on the banks of the Erie Canal!

Below is a Carton boiler, which was produced in Columbia Lafayette Neighborhood during the 1800’s... 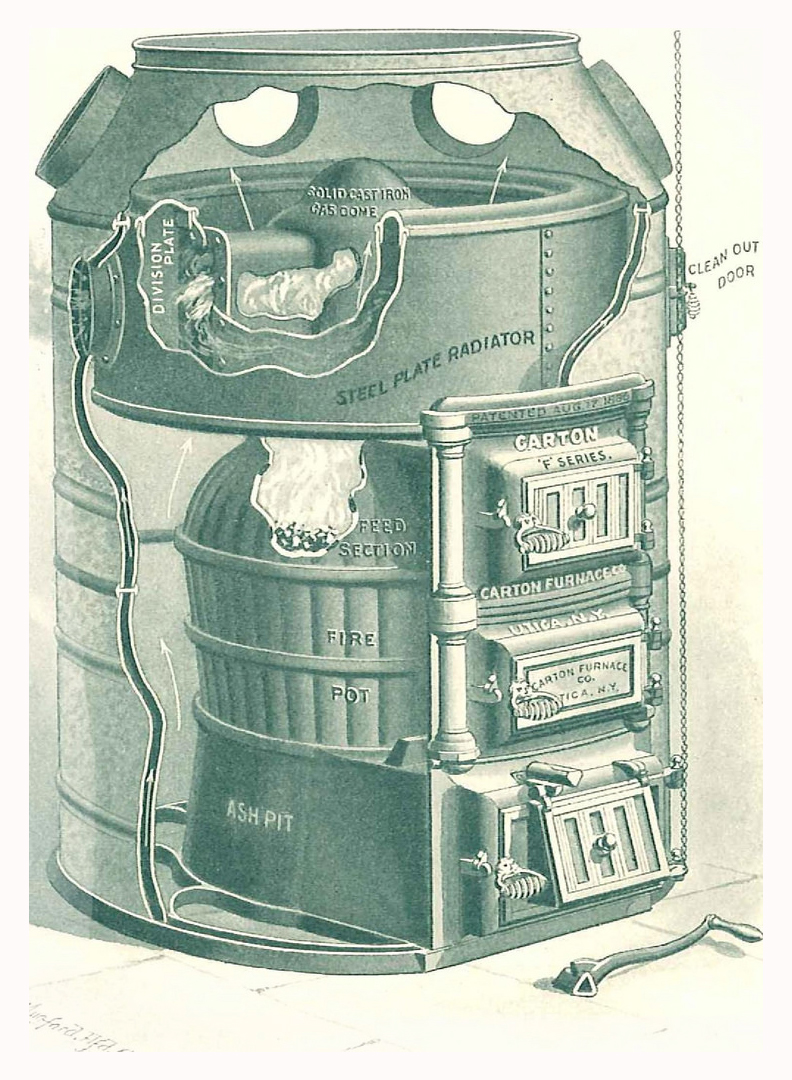 Carton Boiler Made in Downtown Utica

Shown below is a current-day Utica Boiler... 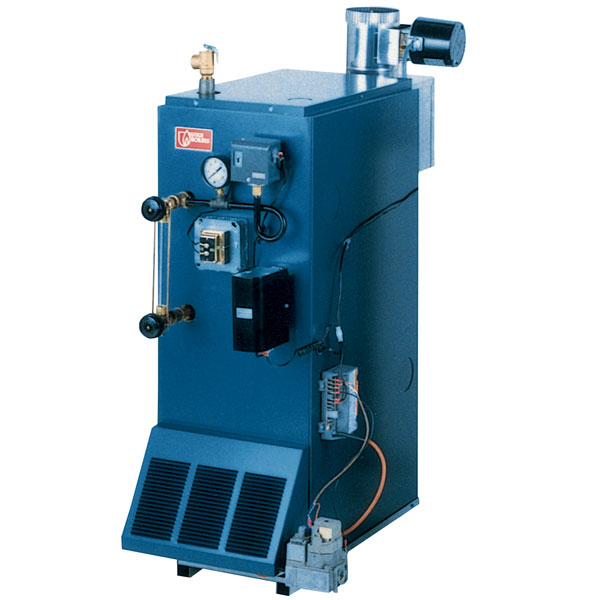 At the time Utica was said to be the largest producer of heating equipment for homes and businesses. For more background read, Fires, Furnaces & Forges.

Best wishes to all 2019 Boilermaker Weekend participants, but did you here a hospital wants to bulldoze 34-acres of downtown? Here's what they want to do with their Bulldozers & Wrecking Balls! 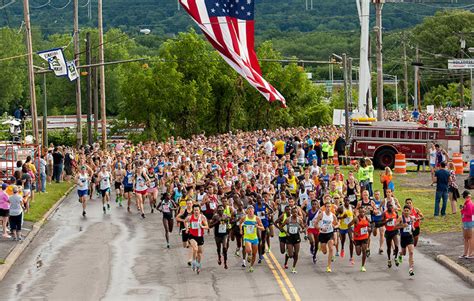 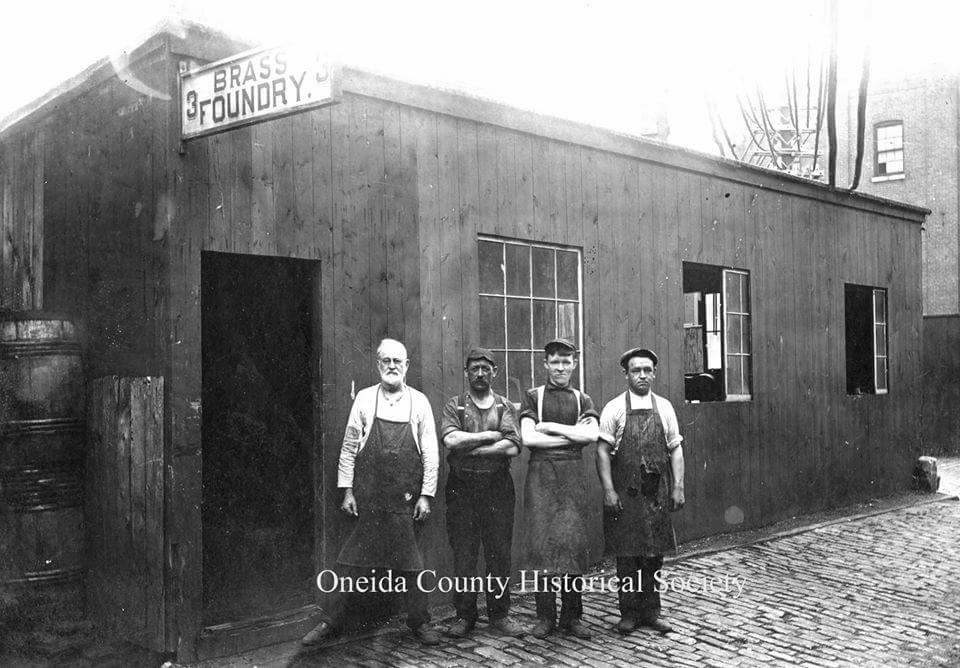 Indoor heating dates back more than a million years. Campfires in caves and huts, then in homes as stones were fashioned into makeshift hearths. Around 2500 BC central fireplaces were developed in Greece. In 1300 BC, a Turkish King was likely the first person to effectively use under-floor heating in a castle.

Romans made more advances, one by moving heating systems into a building’s walls. Chimneys appear after the 14th century. In the 1600s a French inventor created a circulating fireplace. The 1600s and 1700s offered many fireplace improvements. In 1652 Dr. John Clarke of the Massachusetts Bay Colony introduced his heating invention, a cast-iron box stove.

The Industrial Revolution provided more advanced warm-air systems. In England around 1805 a warm-air furnace made of riveted, wrought iron, air chambers encased in brick was invented. Innovations continued. In 1854 patent no. 11,411 was issued for the "Carton & Briggs Hot-Air Furnace", by the inventors John Carton and Joseph Briggs of Utica.

An 1885 advertisement by The Carton Furnace Company 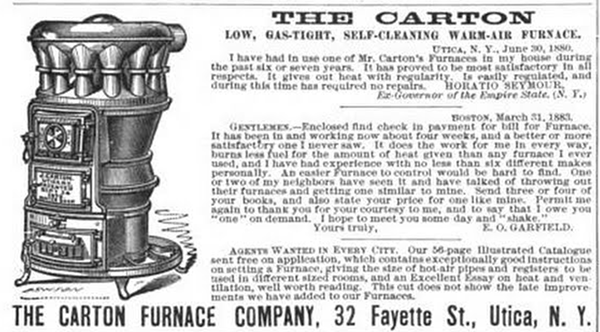 During the 1900s many versions of cast iron furnaces and boilers were offered. Manufacturers located in Utica had a mayor advantage over rivals, this was the recently completed Chenango Canal, which connected Utica factories to the coal fields of Pennsylvania - and the booming Erie Canal! At the time Utica was home to massive factories producing furnaces and boilers. The brick factories lined the banks of the Erie Canal, and the large piles in their coal yards fed the casting operations. Finished boilers shipped easiy along the canal to distant customers. (continued, please scroll to page 6 below)

Complex of Buildings on edge of Erie Canal: These buildings were owned by The International Heater Company. Carton Avenue (cobblestones), and 442 Lafayette Street remain today- as do others - see page five below. 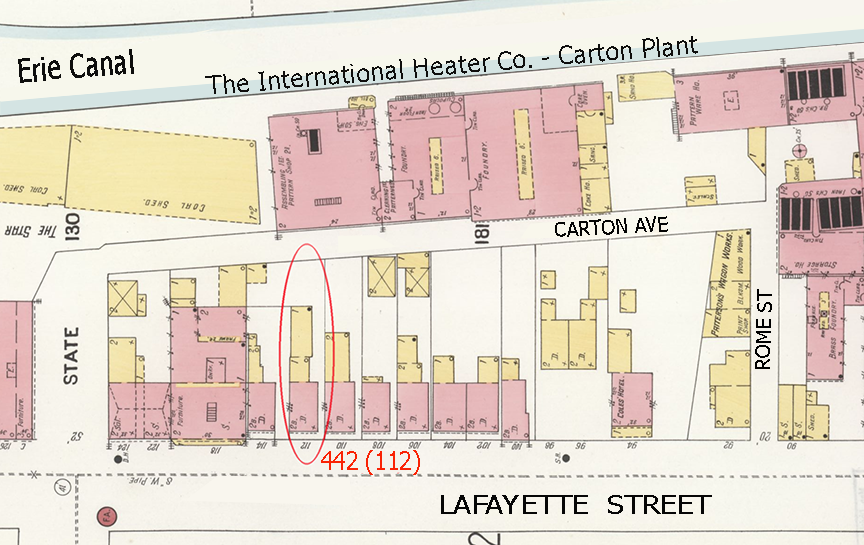 In secret hospital concept map (shown above), the Cobblestone Carton Avenue and Rome Street, other alleys and all buildings would all be erased! 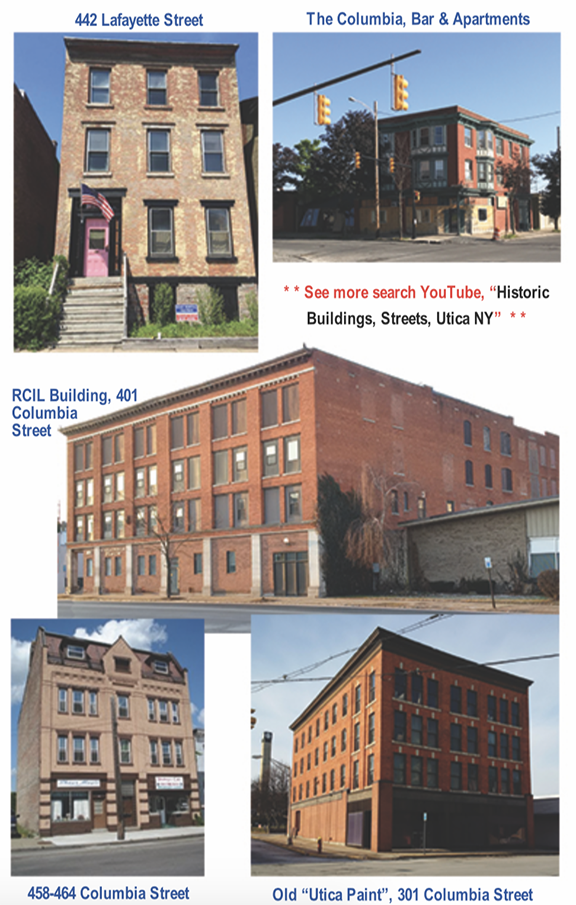 Fires, Forges, Furnaces (continued from page 3 above) Eventually cast-iron radiators appeared. By the 1880s these radiators filled homes and businesses with excellent heating. One radiator line was produced by the The Utica Radiator Corporation, forerunner to ERC (see below). 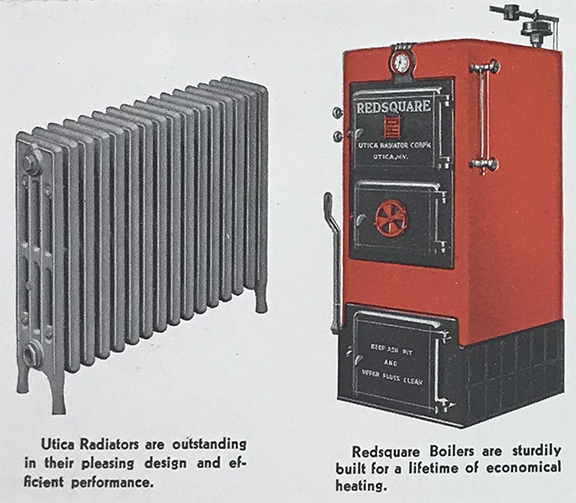 By the1920s most homes had automatic heating systems and newer “blower furnace” came into use in the 1930s. Today ERC International continues producing Utica Boilers, and it was in 1978 that they founded the 1st Utica Boilermaker 15K!

Today, these buildings nestled on Carton Avenue are home to Citation Services who sells and repairs office equipment. The business, buildings, and historic Carton Avenue are threatened by a huge, out-of-scale, hospital. When owner Joe Cerini pur- chased the buildings in 2001 they had leaking roofs, broken & deteriorating brick walls. Now stable and very solid, these buildings stand as testament to many small businesses having invested in them for their unique opportunities Downtown Utica offered; lower costs, very plentiful space/room to grow, and a huge opportunity for future returns - not to mention a chance to take their place into Downtown Utica’s Erie Canal heritage. This brochure and effort comes to you care of Joe and other property owners who’ve been battling for three years to place the new Oneida County hospital at St. Luke’s.

Together, along with medical facilities up-and-down the French and Burrstone Road corridors, they create the Oneida County Medical District (OCMD).

Likewise, the Columbia Lafayette Neighborhood is perfectly positioned so downtown can reach a wonderful finish line. Just as many other cities are finally seeing new waves of downtown redevelopment and residents, Utica will too!

With both our OCMD and the historic Columbia Lafayette Neighborhood, there is no need to bulldoze downtown... ‘Have it both ways!’- expanded healthcare and regional medical campus, plus authentic, livable, and connected downtown neighborhoods!

Together we’re saving Downtown Utica’s Columbia Lafayette Neighborhood; home to 40+ businesses, wonderful and historic buildings, streets, and alleys. Yes, some need restoration, but that’s what we’ll do - just as others have been doing!

The neighborhood opposite the AUD has been targeted for a huge hospital district. Located between Genesee and Varick Streets, and between MWPAI and the AUD, would all erased... For 80,000 ER visits a year? 20-acres of surface parking? A 1,650-car parking garage? Maybe a 2nd garage? We say “No!”

You can help! First understanding we love Downtown Utica and our goal is to preserve it. Yes, healthcare is vital, but better accomplished at Utica College and St. Luke’s - see page 7. An inner-city hospital district would destroy our small-scale city- just as our downtown neighborhoods are returning to life! The New Downtown Utica Brand has companies - people - families returning to work, relax, shop, to call downtown home. An out- of-place, huge box, and sea of hospital parking will not help!

On Facebook? Please join our group #NoHospitalDowntown. We’re also on other social media platforms along with “Better Utica Downtown”. Many have called and written letters to the Utica Observer-Dispatch, perhaps you will too?

Ask family and friends to join our groups, please spread the news... contact government and healthcare officials, many links are offered at: NoHospitalDowntown.com/Resources